Your first reaction when arriving into Paphos is "tourist trap".  The beachfront is lined with hotels as it snakes it way around to the Marina which ends at the Paphos Archaeological Park.

So what do they say when in Paphos do as the tourists do! so we stopped on the waterfront and enjoyed the first of many frappes that would be ordered throughout this trip. 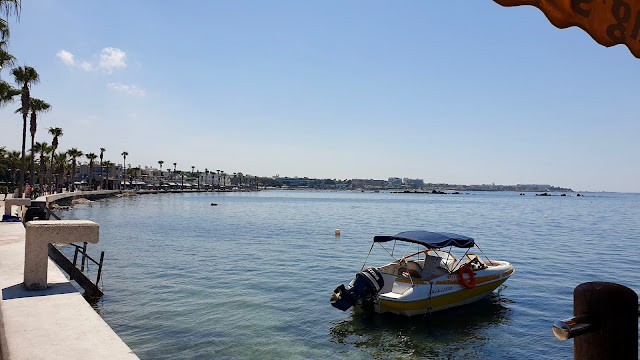 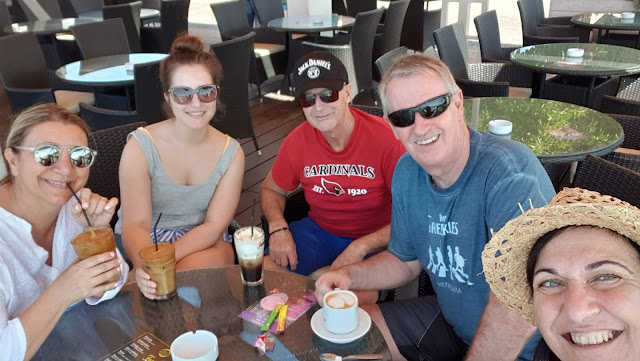 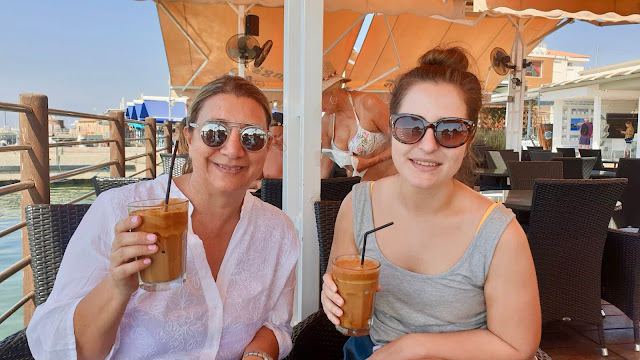 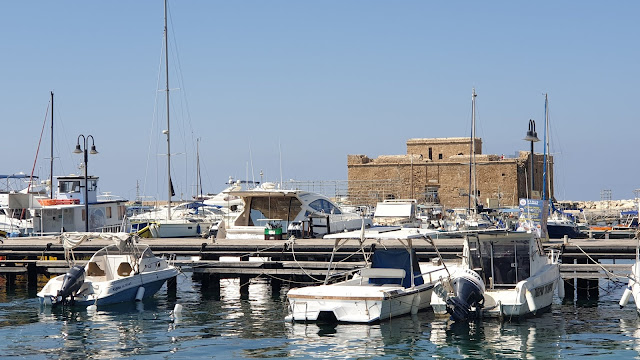 Over the week that we were in Cyprus we spent most of time visiting the places of interest as suggest by our Loney Planet Guide. Cyprus is not super large island and you can get from one side to the other in a matter of hours.  Rather than a day by day blog, I am going for a place by place entry.

Petra Tou Romiou, but is also more recognisable by it's anglo name, Aphrodite's Rock.  It is said that as the waves break over the rock a pillar of foam is formed with an almost human shape.

On arrival we parked at the Visitors Pavilion.  From there you walk through a tunnel that runs under the road to the beach.  With good intentions to swim, the water was a little cool for us, but it didn't seem to worry the others happily frolicking around in the clear water.  Apparently this is also a fabulous spot to watch the Sunset.

This was so unique it had to have it's own blog entry.  We decided to a grocery shop of the essentials and not too far from our apartment we found the supermarket.
Just like all supermarkets outside of Australia, everything is sold under one roof.  So what happens if you have you spread your goods over 2 floors, you install shopping trolley escalators of course...  Never seen them before probably wont again...

Cyprus has had a fascinating past, many invaders, settlers and immigrants have come over the centuries and the island has seen Greeks, Romans, Byzantines, Lusignans, Genoeses, Venetians, Ottomans, British and Turks all seeking to take a part of Cyprus for themselves.

One of its most famous conquerors was Richard the Lionheart, who decided he had too much on his plate trying to get a strong hold in the Holy Land, he sold it to the Templars, who realise this is harder than it looks... begged Richard to take it back who in turn resold it to a Frenchman.
Although Cyprus is still split in two, it has grown into a beautiful and thriving country. I am a bit bias as the majority of my roots sprouted from this country.
Once we had settled ourselves into our apartment we decided we needed to stay awake, so we ventured back out along the waterfront.
It seems on most Mediterranean Islands, there is an old town bordering an old port, with cobbled streets lined  with tourist shops. Add to that the Cafe's and restaurants, then throw in a castle and you will that Cyprus is not exception to the norm.

As if morphing from old to new, the Limassol Marina pulls you into modern Cyprus.  Next to the old port you will find yachts, luxury apartments and trendy restaurants lining the waterfront.  But if you are on a tight budget don't depair, you can also find KFC and Pizza Hut. 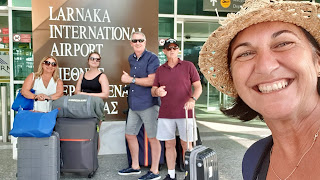 We arrived at Larnaca Airport to blue skies and sunshine, which felt nice after the few weeks of winter we were experiencing at home.

A seamless immigration, all the luggage turned up, what else could we ask for … we were ready to rock and roll

The hire car was waiting for us, and with our trusty google maps, the fab five were zooming down the highway heading for Limassol. 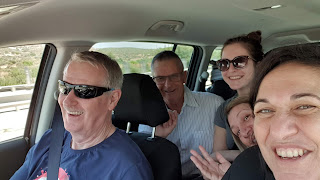 We were staying at the Diana Apartments which where not far from the waterfront.  The building was a little old and tired, but looked good from a distance.  We had air-conditioning and a view, we were happy...

Taking this flight was not all smooth sailing to start with.

Yes, we got caught up in the Bestjet Fiasco.

You can imagine the look on my face when I receive a rogue email Bestjet collapsing, saying something about bankruptcy, cancellations and lost flights. My first thought it was a hoax.

We were one of the lucky ones, Bestjet paid for our airfares and Emirates had confirmed our tickets.  So many people lost their money, with many turning up at the airport only to find they didn't have seats on their flights, airlines cancelled their seats as Bestjet had not handed over the money.

It was a very nerve raking few months as we constantly checked to ensure that Bestjet didn't cancel our flights and abscond with our money, which they had the capability to do.  Something, according to Emirates we couldn't prevent. 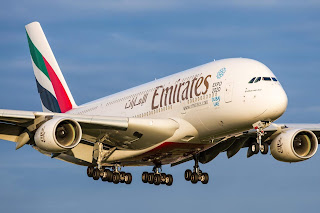 This was the second time that we have flown with Emirates and can I say it is becoming our airline of choice. The last couple of times that we have flown with Qantas it just feels like the standard has dropped each time.  Flight attendants on the long haul seem to be of the  more mature kind and unfortunately, of the can't be bothered kind, and if you can get them smile, you are a winner.  Well that was how I felt on our last trip earlier this year.

But our Emirates girls were all smiles and seemed more attentive.  Emirates seats are more comfortable and I am sure there was more leg room. Emirates present their meals on tray set out beautifully, as oppose to the way Qantas now deliver your meal... Unfortunately I don't have a picture from our last trip.  I know sounds picky ....  but after 12 hours of flying every bit of niceness counts.

If I was to make one complaint, which is not just Emirates, it is the touch screens on the back of seats.  Adults are ok, but really young children don't realised that by punching the screen several times doesn't make it go any faster ..... UGG!

My last flight had me googling, are there such a thing as childless flights....  LOL

Anyway it was good flight to Dubai, then a quick change over for our direct flight to Larnaca Cyprus. 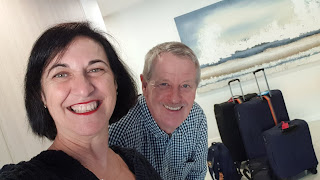 So the bags are packed and we are ready to go, wee thought we would try something new this time.  Instead of organising a transfer to the Airport, we decided to put our Metro to the test.

Travelling light, 2 large suitcases, cabin bag and a backpack, made this decision easier.  Dragging suitcases up the road to the station, no problem.  Lifts up to the platform, easy.  Trying to stop the bags from rolling away on the train, well that was a challenge.

Quick change at Chatswood, Wynyard a little harder as we had to negotiate 2 different lifts to get to platform 6.  But straight into International Airport once we got there...  All up about an hour and a half, but a saving of around $50.

Having arrived sooner than we thought, we envisage we would have to wait sometime for the check in desks to open.  Seeing a couple of the Emirates girls sitting there we decided to ask what time they would be starting...  Bingo....  "bring your bags over and we will check you in now!!" 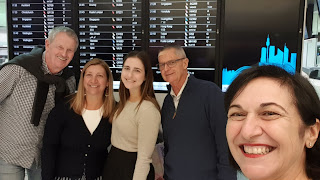 With that done and dusted we cleared security and immigration, even had time to claim our TRS.  We then made our way to the American Express Lounge. Yes, they have a lounge for card holders at Sydney Airport, 2 visits a year, so we used them both to get us in. 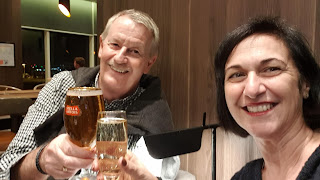 So it was now sit back, relax, eat and drink champagne until our flight is called.
at September 02, 2019 No comments: